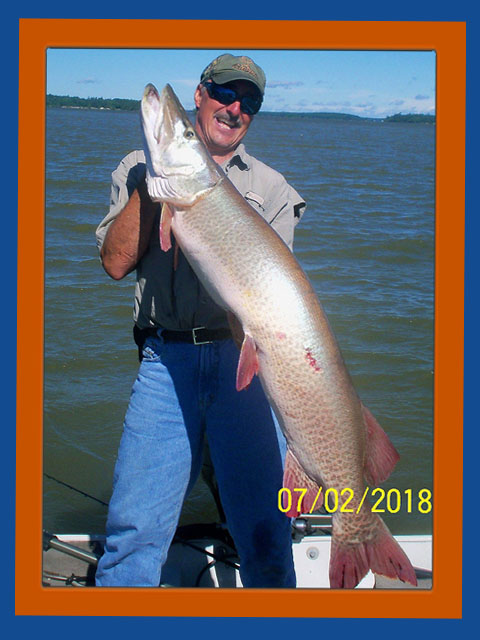 Wabigoon Lake is one of the best-kept secret Musky hotspots in Ontario. With a high population of feeder game and baitfish these Musky have an endless banquet of food. This readily available food source allows to them to grow rapidly, and in Wabigoon they grow big, quick. Wabigoon also provides some excellent spawning habitat, with many streams and sandy areas, allowing for excellent Musky reproduction rates.

Big water usually means big fish, and Wabigoon follows this trend. Wabigoon and its adjoining lakes have over 50,000 acres of water spotted with hundreds of islands, rocky points, shoals, and feeder streams. As all Musky hunters are aware, they are an elusive fish and spending hours trolling and casting is not uncommon before landing, or even seeing one of these memorable beasts. This is especially true on a big lake like Wabigoon, but if you are new to the lake, we will send you right to the hotspots. One of the best places to catch a Musky is in-or-on the edges of large water-cabbage patches that grow off the rocky points leading into deep bays. Wabigoon Lake is home to many such places, and we can help you get on these hotspots.

Our guests catch trophy Musky every week. Most Musky hunters fish for Musky during prime time and then spend other parts of the day targeting other species. Wabigoon Lake offers some great options to fill that void, and anglers can catch northern pike, walleye, crappie and smallmouth bass.

Musky in our lake average between 36 and 40-inches, with several caught each year surpassing the sought after 50 inch mark. Quite often guests catch Musky while trolling or jigging for walleye, leading to quite a surprising battle and great campfire story!

Wabigoon Lake is one of seven lakes in Ontario where government biologists say the next world record Musky could come from. Below is a 56-inch monster Musky caught & released by Ron Stultz, one of our guests. The fish is estimated to be 28 to 30 years old and around 45 pounds.

• Season opens 3rd Saturday in June
• Possession limits S-1 over 102cm (54"), C-0
• Bonny Bay Camp Policy - No fish kept. Bonny Bay Camp policies are established to distinguish its guests as leaders in the stewardship of the fisheries resource.
• Visit www.muskiescanada.ca to be rewarded for releasing Musky over 36"

Summer: Musky love fast moving spinner baits buzzed over a thick cabbage bed. If you use a single hook you will be able to maneuver it through the weeds without getting loaded up with weeds. Short casts into the open pockets are more productive that long casts. Like Northern Pike, shallow is the key. 1 to 5 feet of water!!! You will be amazed when you can pull 50" + fish from 1 to 2 feet of water!

Fall: Musky still love the spinner baits but as the water cools large jerk baits like Suick's are priceless!! Along with the Believer or Swim Whiz, these are great fall Musky baits. It might be against your better judgment but if you fish the weed beds into late fall you can be rewarded with the fish of a lifetime!