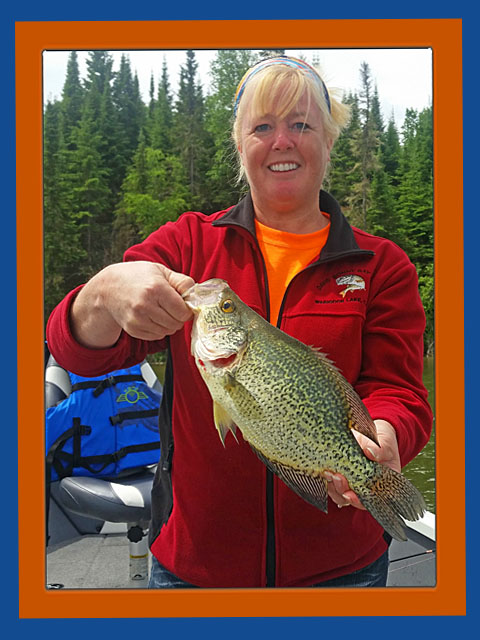 Crappie, also called the Crappy, was once considered an invasive species in Ontario. It's not quite clear how they got into Ontario's waters but their population is exploding and they are spreading. The most common species is the Black Crappie. They were first found in the Kawartha Lakes (Southern Ontario) back in the early 90s, which gave them access to the Great Lakes thus a free swim west. They were first found in Wabigoon Lake a few years ago and since then they are becoming more and more common with some getting to be very large.

Our guests are catching more and more Crappie each year while Perch and Walleye fishing. Crappie have also become a favourite target species of local ice anglers, with the best fishing spots being within minutes of Bonny Bay Camp. Thus far the invasive Crappie has been a welcome addition to the lake, providing another tasty treat for Muskie, Pike and our guests.

In the spring Crappie come out of the deep looking for warmer water in the shallows near the shore or around islands and shoals. As soon as they find water that is 50F degrees or warmer they actively start feeding. This is an early spring window when Crappie fishing can be fantastic. As soon as the water reaches 60F degrees they stop feeding and start spawning. When you get into that mid-spring time when the weather starts to settle down as far as snow and rain and the water starts warming up quickly; the Crappie will have finished spawning and are aggressively feeding again. In regards to Wabigoon Lake; by the first week of June the Crappie are in full swing and ready for your baits.

Crappie hide under heavy cover just like a Largemouth Bass does. They will hide in thick weeds, under the floating edges of Bulrushes, under docks and boats as well as under old logs. Their favorite places are under patches of Lily Pads or around thick patches of Musky Cabbage. Generally you want to fish for them in water that is shallower than six feet and warm.

Crappie will hit tiny spinners and tiny jigs that are tipped with a small piece of live Dew Worm or preserved White Wax Worm. There are also a number of artificial baits designed specifically for Crappie and designed to fit on tiny Tear Drop Jigs. Some anglers like to use the old style Feathered Marabou Jigs that are tiny and look like a Water-Flea. If the Crappie are not aggressive you may have to go old school and just grab a hook and a float and use a small minnow or a small piece of worm.

Opposite of the spring; in the fall when the water starts cooling down Crappie go into that feeding frenzy again while the temperature of the water is between 50F and 60F degrees. As soon as the water gets below 50F the Crappie take off to deeper water and seem to go into hibernation until the lake freezes over.